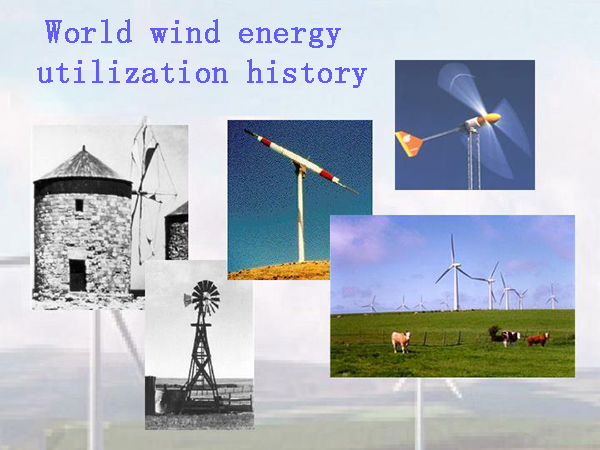 The history of human use of wind energy can be traced back at least 5,000 years ago.

Egypt is considered to be the first country to use wind energy. Sailing boats with the help of wind have appeared in the Nile River basin very early. After a long period of development, sailboats have established outstanding contributions to the development of world civilization in terms of transportation.

About 2000 years ago, humans began to use wind power for production, for example, relying on wind power to drive simple devices to grind rice and divert water for irrigation. There are records of the use of windmills in ancient Egypt.
In Asia, several hundred BC, the Babylonians and the ancient Persians also began to use wind energy. The ancient Persians used the “Panemone” with upright rotating shafts to drive stone mills to mill rice.
In the 10th century AD, the Islamic people began to use windmills to lift water. By the 11th century, windmills had been widely used in the Middle East.

In the 12th century, the concept and design of windmills were introduced to Europe from the Middle East. In 1105 AD, France built the first windmill in Europe and operated in the seaside town of Arles.

The Dutch invented the Tower Wind Mill (Tower Wind Mill) with a horizontal axis, and it quickly became popular in Northern Europe. Dutch windmills are a representative form of European windmills in the Middle Ages.

In the 13th century, windmills had become more popular in Europe, and by the 14th century they had become an indispensable power equipment in Europe. In medieval England, wind and water power were the main sources of mechanical energy.

In addition to flour milling, oil extraction, papermaking, sawing wood and other production operations, windmills were also used to drain water in some low-lying countries (such as the Netherlands and Belgium) at that time. The Dutch used windmills to drain water, blocked the sea to build land, competed with the sea for land, established a country on low-lying beaches, and gradually developed into an economically developed country. The Netherlands has also formulated the most special law in the world-the “Wind Law”, granting windmill owners a “wind power”, and others are not allowed to build other buildings near the windmill. In the 16th century, Dutch windmills were already world-famous.

Before the emergence of steam engines, wind energy was an important power source and was widely used in many fields such as ship navigation, drainage and irrigation, surface grinding, and sawing wood.

With the large-scale exploitation of coal, oil, and natural gas and the availability of cheap electricity, the number of wind machinery has dropped sharply due to high cost, low efficiency, and inconvenient use, and has been gradually eliminated in many areas.