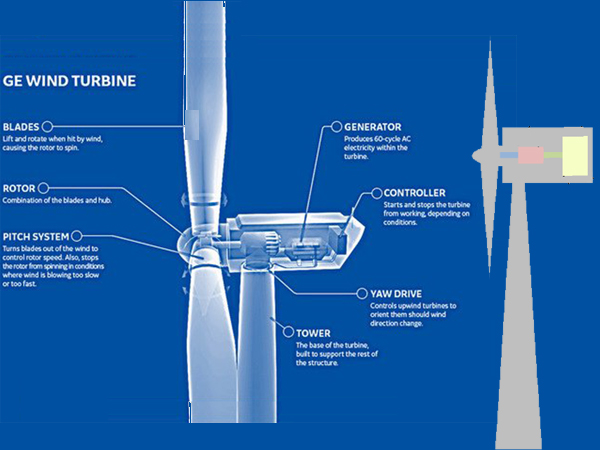 In addition to the two core parts of the wind turbine and the generator, the wind turbine also includes some auxiliary components, which are used to safely and efficiently utilize wind energy and output high-quality electric energy.

1. Transmission mechanism
Although most modern horizontal axis wind turbines used for wind power generation use high-speed wind rotors, the rotational speed of the wind rotors is not so high compared to the requirements for power generation. Taking into account the strength of the blade material and the requirements of the optimum tip speed ratio, the rotational speed of the wind rotor is 18~33r/min. The speed of conventional generators is mostly 800r/min or 1500r/min.

There are also some wind power generation systems using permanent magnet synchronous generators. In the design, the rotor of the generator is directly driven by the wind wheel, and the gearbox is omitted to reduce mass and noise.

2. pairs of wind system (yaw system)
The wind in nature changes in direction. The wind turbine can obtain the maximum wind energy only if the wind blows vertically to the rotating surface of the wind rotor. For this reason, common horizontal-axis wind turbines need to be equipped with a direction control system, so that the rotating surface of the wind rotor is often aligned with the wind direction (referred to as opposite wind).

For small-capacity wind turbines, a wind vane-like tail rudder (also called a tail) is often installed behind the wind rotor to achieve the function of facing the wind.

For large-capacity wind turbines, it is usually equipped with a special wind device – a yaw system, which is generally composed of a wind direction sensor and a servo motor. Large-scale units all use active yaw system, that is, electric or hydraulic drag is used to complete the action against the wind, and the yaw method is usually driven by gears.

Generally, large wind turbines have two independent sensors (anemometer and wind direction, mark) at the top behind the nacelle (outside the nacelle). When the wind direction changes, the wind vane registers the position and transmits a signal to the controller, which then controls the yaw system to turn the nacelle.

Wind turbines are generally also equipped with special braking devices, which can stop the wind rotor when the wind speed is too high to ensure the safety of wind turbines under strong winds.

In addition to housing all the mechanical components, the cabin also withstands all external forces.

The tower is the frame that supports the wind turbine and the nacelle. The purpose is to erect the wind power generation device in a high altitude that is not affected by surrounding obstacles. Its height depends on the influence of ground obstacles on the wind speed and the diameter of the wind rotor. The tower height of modern large wind turbines has reached 100m.