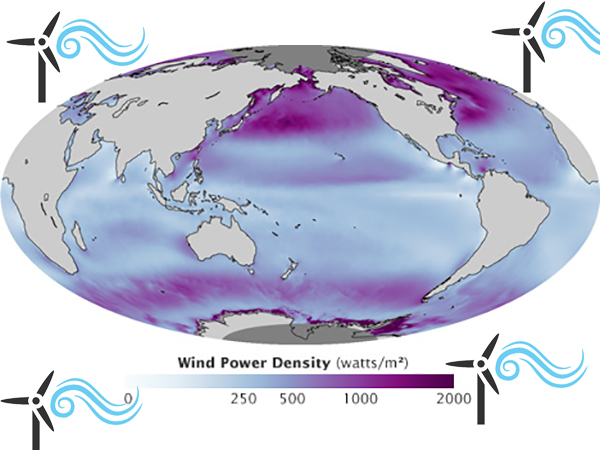 1. The formation of wind
The earth is surrounded by a thick atmosphere from the ground to an altitude of tens of thousands of meters. Due to the rotation and revolution of the earth, the terrain differences in the mountains, deserts, and oceans on the surface, as well as the difference in cloud cover and solar radiation angles, although the sun is shining, the ground heat is uneven. There are differences in temperature in different regions, and the water vapor content in the air is different, which forms different pressure zones.

According to the reason, wind is divided into trade wind, land-sea wind and valley wind.

(1) Trade winds (Figure 1). The areas near the equator are heated and the temperature is high; near the poles, the sun is slanting, with little heat and low temperature. Since hot air is less dense than cold air, the hot air near the equator rises, and the cold air in the polar regions drops. The “vacancies” left are filled with each other, and the hot air flows from the equator to the equator at high altitude. A phenomenon in which cold air flows from the poles to the equator near the ground. As the earth itself rotates from west to east, the atmospheric circulation forms the northeast trade wind in the northern hemisphere and the southeast trade wind in the southern hemisphere.

(2) Sea and land breeze (Figure 2), the heat capacity of the continent and the ocean are different. During the day, under the sun’s rays, the land temperature is higher than the sea surface, the hot air on the land rises, and the cold air on the sea flows near the surface to the coastal land, which is the sea breeze. At night, the land cools faster than the ocean. The air on the sea with a relatively high temperature rises, and the colder air on the land flows along the ground to the ocean. This is the land breeze. In coastal areas, the direction of the sea and land breeze between the land and the sea alternates, which is caused by the changes in temperature between day and night.

(3) Valley wind (Figure 3). During the day, when the sun is shining (generally it cannot be irradiated vertically), the hillside facing the sun is heated more, and the hot air rises: the low terrain is less heated, and the cold air flows from the valley to the hillside, forming a valley wind. At night, the hillside has a large temperature drop, and the air density above it increases, flowing down the hillside, forming a mountain breeze. The valley wind is the wind related to the topography of the hillside formed in the mountainous area. For people who feel this wind in the plain area, it can also be called the plain wind.

The difference in heat capacity between the continent and the ocean will also cause seasonal changes in air pressure. Take North China as an example. In winter, the inland temperature is low, and high-pressure areas are formed. The air flows to the oceanic low-pressure areas in the southeast, so northwest winds often blow in winter. In summer, the opposite is true, with southeast winds often blowing in most parts of our country.

The most widely used instrument for observing wind direction is the wind vane, which can rotate freely on the axis of rotation, and its head always points to the direction of the wind.

(2) Wind speed. Wind speed is the distance that air moves in the horizontal direction per unit time. Generally speaking, wind speed refers to the arithmetic average of wind speed in a period of time.

The height above the ground is different, and the wind speed is also different. Generally within a few kilometers of altitude, as the altitude increases, the wind will gradually increase.

In daily life, the wind level is often used to describe the size of the wind. Wind level is based on various phenomena caused by the influence of wind on the ground or sea surface objects, and the estimation of the magnitude of the wind force according to the intensity level of the wind. In 1805, the British Francis Beaufort (Francis Beaufort) drafted the wind speed grade, which is the internationally famous “Beaufort wind grade”. It was revised later, but the actual application is still 0-12 wind speed.

The several levels of wind often heard in weather forecasts actually refer to the level of wind speed 10m above the ground.

(3) Wind energy and wind energy density. The energy (kinetic energy) of the air flowing in the wind is called wind energy. Wind energy can be calculated according to formula (1)
E=(1/2)mv²=(1/2)ρSv3(1)

Wind energy density is the wind energy flowing through a unit area, which can be calculated by formula (2)
E=E/S=(1/2)ρv3 ——(2)

3. World Wind Energy Resources
The wind that contains energy is a kind of energy that can be used, and it is a renewable process energy. Since wind is caused by solar thermal radiation, wind energy is also a form of solar energy.

About 2% of the solar energy reaching the earth is converted into wind energy, but the total amount is still considerable. Some experts estimate that wind energy on the earth is about 100 times the current total energy consumption in the world, equivalent to the energy contained in 1.08 trillion tons of coal.

According to estimates by the World Meteorological Organization, the rapid wind power (that is, the wind energy obtained per unit time) in the global atmosphere is about 1014Mw, of which the wind energy that can be exploited is about 3.5×109Mw. The global wind energy is converted into electricity, which is equivalent to 2.74-1012 kw.h of electricity, of which the available wind energy is equivalent to 2×1010kw.h, which is 10 times larger than the total amount of hydropower that can be developed and utilized on the earth.

In 1981, the World Meteorological Organization (MWC) presided over the drawing of a worldwide wind energy resource map. The graph shows the average wind speed and average wind energy density in different regions, but since the wind speed varies with seasons, heights, terrain and other factors, this is only an approximate assessment.

The land surface of the earth is about 1.07x 108km², and the area 10m above the ground (average wind speed higher than Sm/s) accounts for about 27%.

Relevant information from the World Energy Council shows that wind energy resources are not only extremely abundant, but also distributed in almost all regions and countries. From a global perspective, wind energy resources are relatively abundant in the west coast of northwestern Europe, central Africa, the Aleutian Islands, the western coast of the United States, South Asia, Southeast Asia, the inland and coastal areas of northwest my country, as shown in Figure 4 (the darker the color in the figure represents wind energy The richer the resources).

If these places are used to build wind farms, the maximum wind power generation capacity per square kilometer can reach 8Mw, and the total installed capacity can reach 2.4×108Mw. Of course this is unrealistic. According to analysis, in areas where the wind power is greater than 5m/s on land, only about 4% of the area is likely to be installed with wind turbines. With the current technological level, the wind power generation per square kilometer is about 330MW, and a reasonable estimate of the average annual power generation is about 2×106kw.h, which far exceeds the current total global energy consumption.