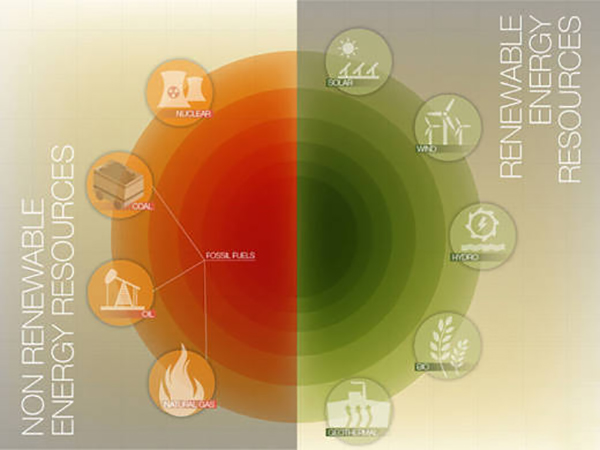 Energy is a natural resource that can be converted into some form of energy for human use under certain conditions. There are many types of energy, and people usually classify them according to their morphological characteristics or the level of conversion and application.

Most of the primary energy is converted into secondary energy that is easy to transport, distribute and use to meet human needs.

②Conventional energy and new energy
Conventional energy refers to energy that has been widely used for a long time under the current technical level and utilization conditions. At this stage, it mainly refers to coal, oil, natural gas, hydropower, nuclear (fission) energy, etc. This type of energy is widely used and the technology is relatively mature. At present, most of the world’s energy consumption is supplied by these five energy sources.
New energy refers to energy that cannot be used on a large scale due to factors such as technology, economy or energy quality, such as solar energy, wind energy, ocean energy, geothermal energy, biomass energy, hydrogen energy, nuclear fusion energy, etc. This type of energy has already begun or will be promoted and used by people, but it has not yet been used on a large scale, and some are even in the research and development or trial stage.
The classification of conventional energy and new energy is relative and may change in different historical periods, depending on their application history and scale of use. The current conventional energy used to be a new energy in the past, and today’s new energy will also become a conventional energy in the future. For example, in the 1950s, nuclear (fission) energy was once a new energy source, but as its development and utilization have become more extensive, many countries in the world have classified it as a conventional energy source.
Although some energy sources have a long history of application, they are undergoing changes in their utilization methods. New and promising new applications are also classified as new energy sources, such as solar energy and wind energy, because they are not yet mature or small in scale.

④Energetic energy and process energy
According to the form of energy existence and transfer, primary energy can be divided into two categories, namely, energy-containing energy and process energy.
Energetic energy refers to substances or entities that contain energy, such as fossil fuels such as coal, oil, and natural gas, nuclear fuels, biomass, geothermal water, and geothermal steam. This type of energy can be stored and transported directly.
Process energy refers to energy that is produced with the movement of matter and exists only in the form of a movement process. Such as the wind blowing in the sky, the water flowing in the river, the rising and falling ocean tides, the undulating waves, the geothermal inside the earth, etc., are all process energy sources. This type of energy cannot be directly stored and transported by people.

⑤Clean energy and non-clean energy
Clean energy refers to energy that has no or less pollution to the environment, and is sometimes called green energy. Clean energy can be energy that does not produce pollutants by itself, such as solar energy, wind energy, and ocean energy; it can also be a development method that combines energy and environmental protection to “turn waste into treasure”, such as waste-to-energy, biogas and other biomass energy. Of use. Unclean energy refers to energy that may cause greater pollution to the environment, such as fossil fuels such as coal.
The division of clean and non-clean energy is also relative. Compared with coal, oil used to be considered a clean energy source, but compared with wind energy and solar energy, it is not clean enough, and it also produces harmful substances such as nitrogen oxides and sulfur oxides.
The energy classification is shown in Figure 3.