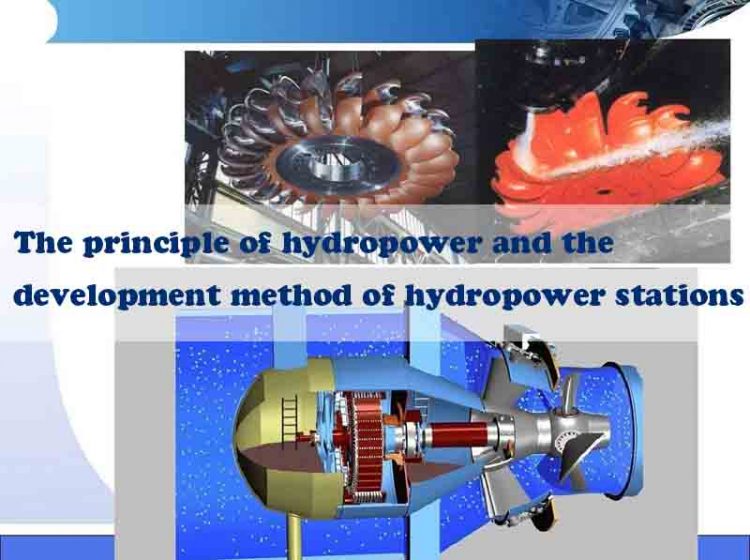 Hydropower is an energy conversion process that converts the potential energy and kinetic energy of water into mechanical energy, and then converts the mechanical energy into electrical energy. The basic principle is to use the weight of water and the impact force of the water flow to drive the water turbine, then the water turbine drives the generator to generate electricity, and finally, through the substation and transmission and distribution equipment, the electrical energy is transmitted to the grid or directly for users. Figure 1 shows the combined working diagram of the turbine and the generator.

Hydropower technology is a science and technology that studies technical and economic issues such as engineering construction and production operation of converting water energy into electrical energy. Water energy belongs to primary energy, which is called secondary energy after being converted into electric energy. In the process of energy conversion, it does not consume water resources, but only utilizes the energy possessed by the flow of rivers. The task of hydropower generation is to concentrate the use of this wasteful water energy to generate electricity that is widely used in industrial and agricultural production and people’s daily life.

Water energy is a renewable energy source in nature, and it is regenerated repeatedly with the hydrological cycle. In the process of converting water energy into electricity, hydropower does not undergo chemical changes, does not excrete harmful substances, and has less impact on the environment, so it is considered a renewable and clean energy. In a hydropower station (plant), the electrical power generated by the hydro-generator set is called output. The output of the so-called water flow is the water energy per unit time, and the size of the energy is measured by the water head and the flow rate.

Because the energy of water is proportional to its flow rate and drop (head), the key to using hydropower to generate electricity is to concentrate a large amount of water and cause a large drop in water level. The existing conditions of natural water energy are different, and the ways of development and utilization are also different. According to the method of concentrated drop (water head), the development methods of hydropower can be divided into dam type, water diversion type and hybrid type.

The post-dam hydropower station is shown in Figure 2. The powerhouse is built behind the dam, and all upstream water pressure is borne by the dam body, which is suitable for high water head conditions. The water from the reservoir flows through the pressure water pipe in the dam body and is introduced into the powerhouse to drive the hydro-generator to generate electricity. In a riverbed hydropower station, the power plant is built in the riverbed. As a part of the dam body, it also acts as a water retaining function and directly bears the pressure of the upstream water. The water flow enters the plant from the upstream, drives the hydro-generator and then drains into the downstream. This kind of power plant has no storage capacity and does not need special water diversion pipelines. It is generally built on the river sections with gentle longitudinal slopes in the middle and lower reaches.

Read more: Hydropower – what is small hydropower as others say?