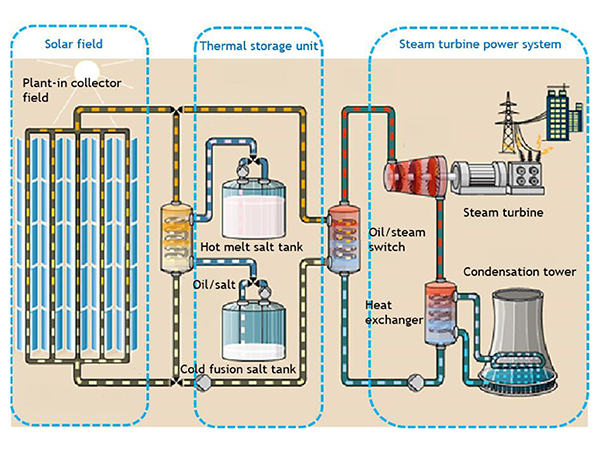 The principle of solar steam thermal power generation is similar to that of traditional thermal power generation, and the generator sets and power cycles used are basically the same. The difference is that the heat source for steam generation is solar energy, not fossil fuels such as coal. Generally, a solar heat collector is used to collect the light radiation of solar energy and convert it into heat energy, heat a certain working fluid to a high temperature of hundreds of degrees Celsius, and then generate high-temperature and high-pressure superheated steam through a heat exchanger, which drives a steam turbine to rotate and drives a generator to generate electricity.

① Heat collecting part
Solar energy is a relatively dispersed energy source. The role of heliostats (or concentrating systems) is to focus solar radiation to increase its power density. The concentrating system of large-scale solar thermal power generation will form a huge solar collection field. In order to be able to gather and track the sun’s light, it is generally necessary to be equipped with a solar tracking device to ensure that solar energy is continuously and efficiently obtained during sunny periods.
The function of the collector is to absorb the focused solar radiation and convert it into heat energy to provide the working fluid. It is a key part of various solar energy devices. Currently, vacuum tube and cavity structures are commonly used.
The entire heat collection part can be regarded as a huge concentrating heat collector.

③The heat storage and heat exchange part
As solar energy is affected by seasons, day and night, and meteorological conditions, in order to ensure the stability of the heat source of the power generation system, a heat storage device is required. There are four types of heat storage: low temperature (less than 100℃), medium temperature (100~500℃), high temperature (above 500℃) and extremely high temperature (about 1000℃), using hydration salt, heat transfer oil, molten salt, and zirconia respectively. Refractory balls etc. are used as heat storage materials. The heat energy stored in the heat storage device can also be used when there is a shortage of light.
In order to meet the needs of steam turbines for power generation, the transmitted and stored thermal energy needs to be converted into high-temperature and high-pressure steam through a heat exchange device.

④ Steam turbine power generation part
The high-pressure and high-temperature steam formed through heat exchange can drive the turbo-generator to work. The power generation part of the steam turbine is an important part of realizing electric energy supply, and its electric energy output can be a stand-alone power supply or a grid-connected power supply.
In addition to the usual steam turbine generator sets, there are also gas turbine generator sets and Stirling engines that use solar energy to heat the air.