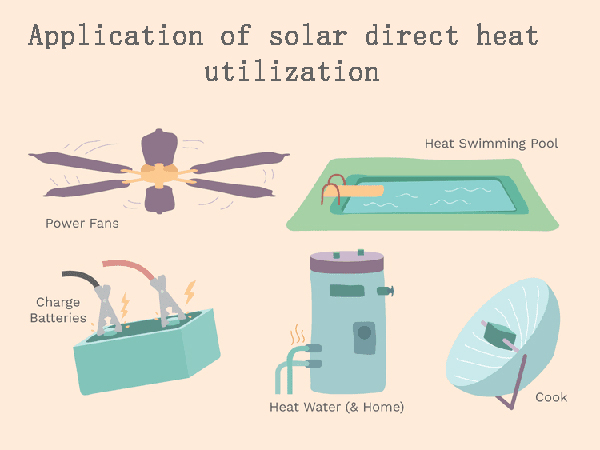 (2). Solar cooker
A solar cooker is a device that collects solar energy and uses the absorbed heat for cooking. Solar cookers often use spherical point concentrating collectors, as shown in Figure 2.

At present, solar cookers are widely used and the technology is relatively mature.

The left half of Figure 3 is the refrigerant cycle, which belongs to the reverse cycle and consists of a condenser, a throttling device and an evaporator. The high-pressure gaseous refrigerant releases heat to the cooling medium in the condenser and is condensed into a low-temperature and high-pressure liquid. When it enters the evaporator through a throttle valve (or expansion valve), it rapidly expands and vaporizes, and a large amount of evaporation is absorbed during the vaporization process. The heat of the refrigerant water in the device, the refrigerant water produced by the refrigerator is led to the air conditioning box to achieve the purpose of refrigeration and air conditioning, and at the same time absorb the heat of the cooled medium to produce a refrigeration effect.

The right half of Figure 3 is the absorbent cycle, which is a positive cycle, which is mainly composed of an absorber, a generator and a solution pump. In the absorber, the liquid absorbent is used to continuously absorb the low-pressure gaseous refrigerant produced by the evaporator to achieve the purpose of maintaining the low pressure in the evaporator; the refrigerant-absorbent solution formed by the absorption of refrigerant vapor by the absorbent is pumped up by the solution After being compressed, the solution enters the generator; in the generator, the solution is directly heated and boiled by the heat collecting medium of the solar collector. The refrigerant with low boiling point vaporizes to form a high-pressure gaseous refrigerant, which enters the condenser to liquefy, and the remaining absorbent The concentrated solution returns to the absorber to absorb the low-pressure gaseous refrigerant again.
It is reported that ammonia absorption refrigeration can produce chilled water at -20~20℃, which can meet the temperature requirements from refrigeration to air-conditioning, but requires a rectification device and the system is more complicated; the lithium bromide absorption refrigeration technology is relatively mature and can produce 7- Chilled water at 20°C.
In addition, in winter, solar air conditioners first store the hot water heated by the collector in the water storage tank. When the temperature of the hot water reaches a certain value, the water storage tank directly provides hot water to the air conditioning tank to achieve the purpose of heating and heating. Figure 4 is a schematic diagram of a solar air conditioner designed by Sri Lanka Power Star.

(2) Photoelectric conversion of electric energy to drive refrigeration
Photoelectric conversion of electrical energy to drive refrigeration actually involves first converting solar energy into electrical energy (a photovoltaic power generation method), and then using electricity to drive air conditioners. The key technology of this method lies in photovoltaic power generation, not in air conditioning, and will not be discussed in detail here. Figure 5 shows the 10200 mobile solar air conditioner designed by Greencore.

③Sun Pool
Due to the volatility and discontinuity of the sun’s radiation on the ground, if you want to achieve a continuous supply of solar energy, it is necessary to collect as much solar energy as possible when the sun is full, and try to store the unused part so that the sun is not enough. It can even be used at night when there is no sunlight.

The solar pool is a way to centrally store solar energy and can be used as a heat source.

The bottom of the solar pool is deep and dark, and it has a strong ability to absorb solar radiation. The pool water is natural salt water or salt water formed by adding sodium chloride and magnesium chloride. It has a certain concentration gradient. Generally, the surface layer is clear water. The deeper the depth, the greater the salinity, and the bottom layer is even saturated. After the light radiation is absorbed by the bottom of the pool and converted into heat energy, except for the limited heat dissipation at the bottom of the pool, there is basically no heat dissipation to the surface of the pool. This is because the stable salt solution cannot be convective, and the thermal conductivity of the water itself is poor, and the upper layer of water actually becomes a thick insulation layer. The sun keeps radiating and the bottom water keeps storing heat, and the water temperature gets higher and higher. By taking out the heat from the bottom of the solar pool, various applications can be carried out, and the heat source is relatively stable.

Both natural oceans and salt lakes have similar heat storage characteristics. The working diagram of the solar pool is shown in Figure 6.

The United States, Russia, Canada, Australia, India, Iran, Japan and other countries are all conducting research on solar pools.