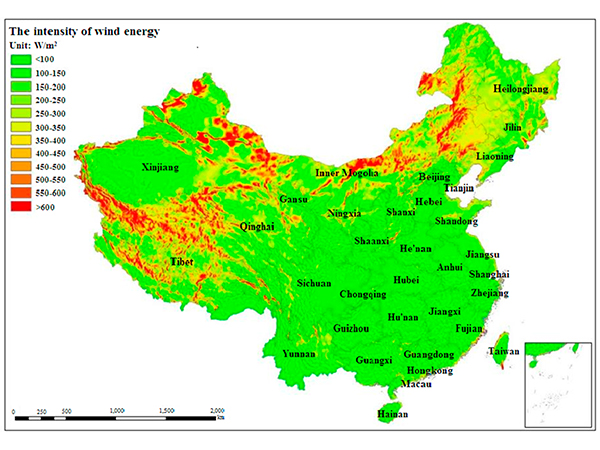 China has a vast territory, strong monsoons, and a wide distribution of wind energy resources, and the total amount is quite abundant. According to relevant research estimates, the national average wind energy density is about 100W/m², and the country’s total wind energy reserves are about 4.8×109Mw. The land and offshore areas with a height of 10m can be exploited and utilized. The wind energy resource reserves are about 1.0×106MW, of which there are very good developments. The value of onshore wind resources is about 2.53×105Mw, which is roughly equivalent to 51.32% of China’s hydropower resources and technologies that can be developed.

The Wind Energy and Solar Resources Assessment Center of the China Meteorological Administration announced the distribution of average wind speed and effective wind power density across the country, as shown in Figure 1 and Figure 2, respectively.

1. Wind energy rich area
The area with rich wind energy refers to the area where the wind speed is above 3m/s for more than half a year, and the wind speed is above 6m/s for more than 2200h. The effective wind energy density in these areas generally exceeds 200W/m², and some islands can even reach more than 300W/m².
The “Three Norths” regions (Northeast, North China and Northwest) are the regions with the best inland wind energy resources, such as Dabanyu and Karamay in Northwestern Xinjiang, Dunhuang and Hexi Corridor in Gansu; Erenhot in Inner Mongolia, northern Zhangjiakou, and northeastern China North of Daxinganling.
Certain coastal areas and nearby islands are also areas with the most abundant Chinese wind resources, such as Dalian on the Liaodong Peninsula, Weihai on the Shandong Peninsula, and Shengsi, Zhoushan, and Pingtan on the southeast coast. Among them, the average annual wind speed in Pingtan area is 8.7 m/s, which is the largest on flat ground in the country. In addition, the area in the lower reaches of the Songhua River is also rich in wind energy resources.

2. Areas with richer wind energy
The area with richer wind energy refers to the area where the wind speed exceeds 3m/s and exceeds 4000h, and where the wind speed exceeds 6m/s and exceeds 1500h within a year. The characteristic of wind resources in this area is that the effective wind energy density generally exceeds 150~200W/m², and the annual cumulative time for the occurrence of 3~20m/s wind speed is 4000~5000h.
Areas with richer wind energy include many areas near the east along the line from Shantou to Dandong (such as Wenzhou, Laizhou Bay, Yantai, and Tanggu), and the “Three Norths” along the Alashankou of Tianshan Mountain in the Tumen River Mouth, the northern foot of Yanshan Mountain, and the Hexi Corridor. The southern part of the region (such as Yingkou in the northeast, Jining and Niaolanhot in the north of China, Qitai and Tacheng in the northwest), and the central area of ​​the Qinghai-Tibet Plateau (such as the Bangor area and Tanggula Mountain). In fact, there is a lot of time for the wind speed not less than 3m/s at the Qinghai-Tibet altitude. The reason why it is not a wind-rich area is because the altitude here is high and the air density is low.

4. Wind energy poor areas
Wind-energy-poor areas refer to areas with low average wind speeds or less effective wind speeds, including the Yunnan-Guichuan and Nanling Mountains, which are the smallest wind energy areas in the country, and the Yarlung Zangbo River and Qamdo regions where it is difficult for cold and warm air to penetrate due to mountain barriers, and The western part of the Tarim Basin surrounded by high mountains.

According to the statistics and calculations of wind energy data of national meteorological typhoons, China’s terrestrial wind energy zoning and the percentage of the country’s land area are shown in Table 1.

According to the statistics and calculations of wind energy data of national meteorological stations, the wind energy resources of various provinces in China are converted into power generation as shown in Table 2. Among them, the four provinces of Inner Mongolia, Xinjiang, Heilongjiang and Gansu have the most abundant wind resources.