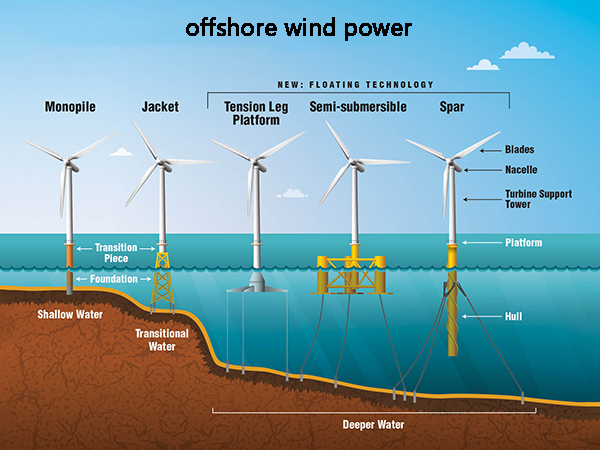 Compared with onshore wind farms, the construction of offshore wind farms is more technically difficult, and the generated energy needs to be transmitted by laying submarine cables. The advantages of offshore wind farms are that they do not occupy valuable land resources, are basically unaffected by topography, have higher wind speeds, more abundant wind energy resources, larger single-unit capacity of wind turbines, and higher annual utilization hours.

The key technologies of offshore wind power are as follows.

3. unit design
Due to the harsh offshore climate and complex ocean tides, offshore wind farms have a high equipment failure rate during operation. The most common problems are unit blade damage, cable fatigue damage, gearbox damage and transformer failure. Moreover, since the crews are all located at sea, the maintenance personnel can only reach the designated location through work boats or helicopters to repair or replace the equipment, so the maintenance cost is very high. This puts forward higher requirements for the design and monitoring level of offshore units.

(1) Anti-typhoon. Affected by the earth’s rotation and atmospheric circulation, the west coast of the Pacific Ocean and the west coast of the Atlantic Ocean are the places where typhoons and leg winds are generated and active. Typhoon and Enfeng are extremely destructive, and their limit wind speed can reach 90m/s or even greater. This is extremely harmful to coastal wind farms. Therefore, the current global offshore wind farms are only distributed on the east coast of the Atlantic Ocean (Europe), and no offshore wind farms have been built on the west coast of the Atlantic Ocean. On the east coast of the Pacific Ocean, only the East China Sea Bridge project is under construction. Therefore, enhancing the wind resistance of offshore wind turbines is an important topic, which is mainly reflected in the design of award blades, towers and foundations. The first is to adopt the design of flexible prize blades. When the typhoon strikes, the prize blades are deformed, which greatly reduces the force and protects the unit from damage; the second is to consider the rigid tower design, increase the wall thickness of the tower, and avoid the tower. Defects occur locally in the frame and cause structural instability, resulting in breakage.

(2) Salt corrosion resistance. The climate in coastal areas is humid and the air humidity is high. The electrical equipment of coastal wind farms is seriously corroded by salt spray, so the reliability of electrical equipment is relatively high. Generally, dry-type unit transformers commonly used in inland wind farms are not used, and box-type unit transformers must be used to improve moisture resistance. The main switch is generally a gas-insulated switch, so that all components are sealed without environmental interference.

(3) Wind farm monitoring. The control principle of offshore wind turbines is similar to that of onshore wind turbines, but due to the inconvenience of on-site operation and maintenance of offshore wind turbines, higher requirements are put forward for the safety and reliability of the control system, remote monitoring, and remote maintenance. In the design, a lot of redundancy technology is required. For example, sensors, actuators, communication lines, etc., all use multiple backup schemes. Each device of the unit is equipped with sensors, and the remote monitoring system continuously monitors the status of the unit and equipment through the communication line (optical cable or wireless communication), and conducts online diagnosis to guide the controller to act in advance to avoid the occurrence of faults, thereby improving the performance of the unit. reliability.

5. Grid access
The electrical wiring and access system of offshore wind farms are basically the same as those of onshore wind farms. Each wind turbine needs to be connected to the adjacent units with cables, collected by one or more medium voltage centralized control switch components and cable units, and further boosted and sent to a higher voltage power grid. When the capacity of the wind farm is greater than 100MW, a high-voltage system above 36kV is generally used to minimize the loss caused by the interconnection of wind turbines within the wind farm. Submarine cables are generally designed with three-core cables, because offshore wind farms are large and require long-distance power transmission. The charging current from the three-phase cable is short-circuited, so there is no loss caused by reverse current in the outer metal layer, and the loss of the outer metal parts of the similarly designed armored submarine cable is also very low. When laying submarine cables, the inside of the wind farm and the outgoing cables are put into the seabed by the laying ship, and high-pressure water jets are used to impact the seabed, and then the cables are buried 1m below the seabed. If the seabed surface is hard rock, a layer of stone or gravel can be laid on the cable. In this way, the risk of damage to submarine cables from fishing gear, anchors and sea wash can be reduced. As the scale of offshore wind farms continues to expand, the sites are getting farther and farther from the main grid on land. Light-duty high-voltage direct current transmission (VSC-HVDC) technology is increasingly favored by wind power transmission systems, especially offshore transmission, due to its advantages in cost, maintenance, and transmission quality.