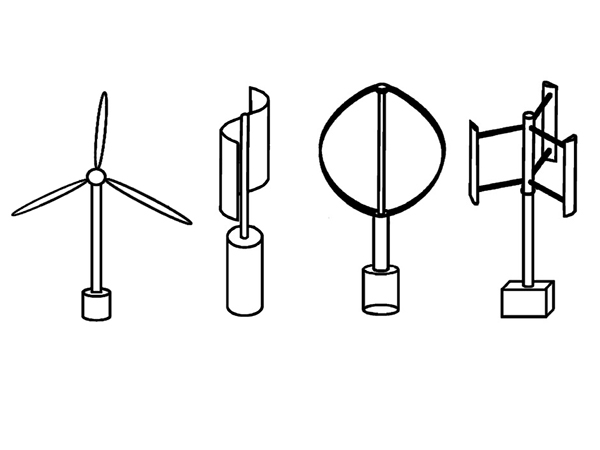 1).Dutch wind turbine
The Dutch windmill was invented by the Dutch in the early 12th century, so it is called “Dutch windmill” and was widely used in Europe (especially the Netherlands, Belgium, Spain and other countries), with a maximum diameter of more than 20m.
This may be the earliest horizontal axis wind turbine to appear.
There are two types of Dutch windmills: one is that the windmill hut can rotate along with the wind direction; the other is only the roof on which the windmill is installed can rotate along with the wind direction.

4). Centrifugal throw-out wind turbine
Figure 4 is the schematic diagram of the centrifugal throw-out wind turbine, which uses hollow blades. When the wind rotor rotates under the action of the airflow, the air in the blade cavity is thrown out from the tip of the blade due to the centrifugal force, and “sucks” The incoming air flows in from the bottom of the tower. The air turbine coupled with the wind turbine is installed inside the tower bottom, and the accelerated airflow caused by the rotation of the wind wheel at the bottom of the tower is used to push the air turbine and drive the generator to generate electricity.
This design was invented by the French Antonio, so it is also called the Andreau wind turbine. This is a unique design that does not directly utilize natural wind. Due to the complex structure and the large friction loss of air flow in the channel, the overall efficiency of the device is very low. After World War II, the British Fleet Cable Company built this wind turbine in 1953, and no one has made it since. It consists of a hollow tower with a height of 26m and a perforated wind wheel with a diameter of 24.4m.

The structure and principle of the Gorlov vertical axis wind turbine is similar to that of the D-type wind turbine, but it adopts a twisted design, as shown in Figure 11.

2). Building wind turbines
With the development of modernization and urbanization, there are more and more high-rise buildings in cities and they are getting taller. These high-rise buildings interfere with local airflow and form a special wind-gathering effect. These high-rise buildings have a lot of energy, and they are in the energy-using center, and a lot of energy can be obtained by making full use of these wind energy. The most typical example is a building with a double tower structure. The narrow passage between them is prone to the “Venturi effect”, forming a tuyere phenomenon. Three institutions in the United Kingdom and scientists from the University of Stuttgart in Germany and the Netherlands have set out to design an office building (Figure 14) that can use the wind power generated by such high-rise buildings. Between the “twin towers” of the building, a The three sets of huge turbine generators, because the sections of the main buildings of the two towers are arc-shaped, can “squeeze” the phoenix to the middle and blow into the turbine, which greatly improves the working efficiency of the wind turbine. When the three sets of turbine blades work at the same time, the electricity generated can meet at least 1/5 of the electricity demand of the building. If the research is successful, it is expected to change the power supply structure of the city.