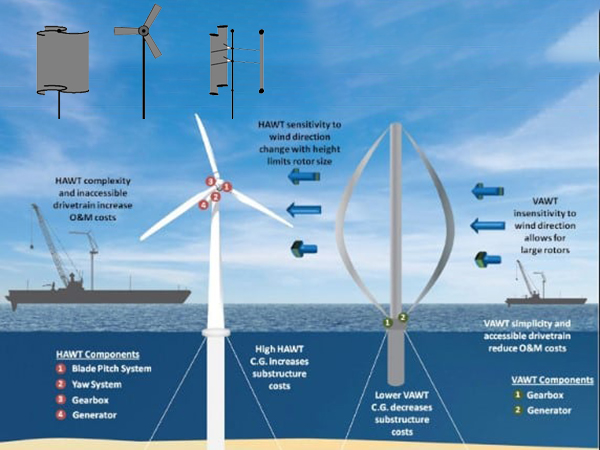 The generator is the core equipment of wind power generation. It uses the phenomenon of electromagnetic induction to convert the mechanical energy output by the wind wheel into electrical energy.

Small-power wind power generation, DC generators were generally used in the past, and now they have been gradually replaced by AC generators. Most of the large and medium-sized wind turbines use AC generators.

The electric energy sent to users or into the power grid is generally required to be alternating current with a fixed frequency. Due to the volatility and randomness of wind energy itself, it is difficult for the voltage and frequency output by traditional wind turbines to always meet the frequency requirements.

Today, wind turbines are mostly connected to the grid through converters based on power electronic technology, and some new types of wind turbine structures are derived.

At present, the mainstream large and medium wind turbines include the following types.

Constant-speed and constant-frequency wind turbines are all of the fixed-pitch stall regulation type. The speed of the generator is kept at a constant value by the wind turbine controlled by the fixed pitch stall, and then the rotation frequency of the stator magnetic field is equal to the frequency of the grid after the wind turbine is connected to the grid. Therefore, the speed variation range of the rotor and the wind rotor is small and cannot be kept at the maximum value. The better the blade tip speed ratio, the lower the efficiency of capturing wind energy.

Doubly-fed induction generators generally use a speed-up gearbox to increase the speed of the wind rotor several times, and the speed of the rotor transmitted to the generator is significantly increased, so a high-speed generator can be used, which is small in size and light in weight. The capacity of the double-fed converter is only related to the slip capacity of the generator, and it has high efficiency and low price. The disadvantage of this scheme is that the speed-up gearbox is expensive, noisy, and easy to be damaged by fatigue.

For direct-drive wind turbines, the rotor is directly coupled to the rotor of the generator without going through a gearbox, hence the name “direct-drive”. Since the rotational speed of the wind rotor is generally low, only low-speed permanent magnet generators can be used. Because there is no gearbox, the reliability is high: but the low-speed permanent magnet generator is used, which is large in size and high in cost; and all the power of the generator needs to be fed into the grid by the converter, which has a large capacity and high cost.

If the power conversion device is also counted as a part of the generator set, and only the characteristics of the electric energy finally fed into the grid are observed, then the direct-drive permanent magnet synchronous generator set also belongs to the variable-speed and constant-frequency wind power generation system.

Variable-speed constant-frequency wind turbines (including doubly-fed induction generators and direct-drive permanent magnet synchronous generators) are of variable-pitch type. Through the combination of governor and pitch control, the speed of the wind rotor can follow the change of wind speed and maintain the optimal tip speed ratio operation, so that the wind energy utilization coefficient can keep the maximum value in a wide range of wind speed changes. , the energy capture efficiency is the highest, it is said that the power generation of the unit can be increased by 3% to 10%, and the force of the unit structure is relatively small. The electric energy generated by the generator is adjusted by the converter, and the electric energy of the same frequency, same phase and same amplitude as the grid is transmitted to the grid. In terms of performance, variable speed wind turbines have obvious advantages.