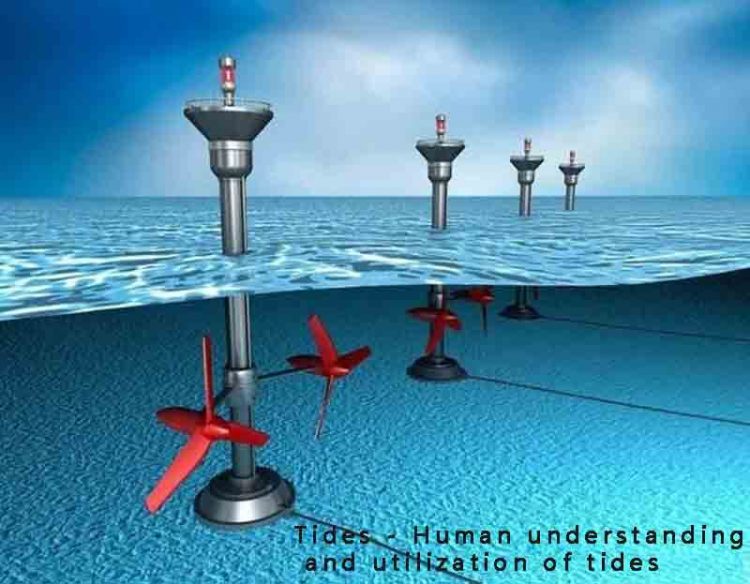 Scientists in ancient China have long recognized that tides are related to the moon. For example, Wang Chong, a famous thinker in the Eastern Han Dynasty of China, said that “the rise and fall of the waves also rises and falls with the moon”; in the poem “Spring River and Flowers and Moon Nights” by Zhang Ruoxu, a poet of the Tang Dynasty, “the tide of the spring river is even the level of the sea, and the bright moon on the sea grows with the tide”, which also shows the image Describe the relationship between ocean tides and the moon. Later, people further realized that the tide is a fluctuating phenomenon of “one is full and another is exhausted, and the exchange is continuous”. “When the tide rises and falls, the sea does not increase or decrease. When the moon comes, the water will follow it.”

The dynamic theory of tides emerged in the 18th century after Newton’s discovery of gravitational force in the 17th century (gravitational force exists between any two objects, as well as between the Sun, Moon and Earth). People have a further understanding of the causes of tidal phenomena. Tides are regular, periodic fluctuations in seawater caused by the different gravitational pulls of the sun and the moon on the earth.

On the first day of the lunar month, the sun and the moon are located on the same side of the earth, and the three are approximately in a straight line. The gravitational direction of the sun and the moon is the same, and the combined force is the largest. The solar tide and the lunar tide occur at the same time, forming a spring tide. On the fifteenth day of the lunar calendar, the sun and the moon are located on both sides of the earth and are approximately in a straight line with the earth. The lunar tide facing the moon and the solar tide facing away from the sun work together. Together, they form a tide. This is the origin of “the rising tide of the first and fifteenth days of the first day”.

When the sun and the moon are at right angles to the earth, the ebb tide of the solar tide and the rising tide of the lunar tide work together to cancel each other out, forming a neap tide with a weaker tide. There is a saying among Chinese people that “on the eighth and twenty-third of the first lunar month, you can see beaches everywhere”. The schematic diagram of tides formed by the gravitational forces of the sun and the moon is shown in Figure 1.

Fun fact: Does our distance from the center of the earth change too?
People are already very familiar with the tides of the ocean. In fact, there are tidal phenomena in the empty atmosphere and the hard crust, but the “tidal” there is not as significant as the fluctuation of sea water. The tide of the solid earth is about tens of centimeters, that is to say, the distance from us to the center of the earth will also vary by tens of centimeters at different times.

Tides are the earliest marine dynamic resources known and utilized by human beings.
The use of tidal energy in China is the earliest, dating back to the Tang Dynasty more than 1,300 years ago.
In the 6th and 7th centuries AD, coastal residents in China used tidal mills to mill grains, and there were some small workshops that used tides to push mills. This early tidal mill was discovered in the Penglai area of ​​Shandong province in recent years.

Around the 10th century AD, along the Basra coast of the Persian Gulf, people began to use tidal energy as the power to drive waterwheels for flour processing. In the 11th and 12th centuries AD, tidal mills also appeared on the Atlantic coasts of France, England, and Spain, and some were used until the 20th century. A 12th-century tidal mill still remains in Suffolk, England, and is still grinding millet for tourists to visit.
Similar tidal water mills were used by Russian coastal residents in the 16th century. By the 18th century, sawmills powered by tidal energy appeared in Arkhangelsk, Russia.

The tidal mills on the west coast of Europe set the early industrial nations on the road to riches and brought it to the New World of America. In 1600, the French built the first tidal mill in the Americas on the east coast of Canada.

Some tidal mill designs are more advanced. In 1438 Marino designed a modern tidal power station. At high tide the water passes through one canal into a pool, at low tide the water pushes a mill gear through another canal and back to the sea. In 1713, Pelzer of Dunkirk invented a two-way tidal mill, which can not only use the rising tide, but also the falling tide, and can automatically open and close the gate. In the 20th century, the charm of tidal energy reached its peak, and people began to use the tidal energy of rising and falling seawater to generate electricity.