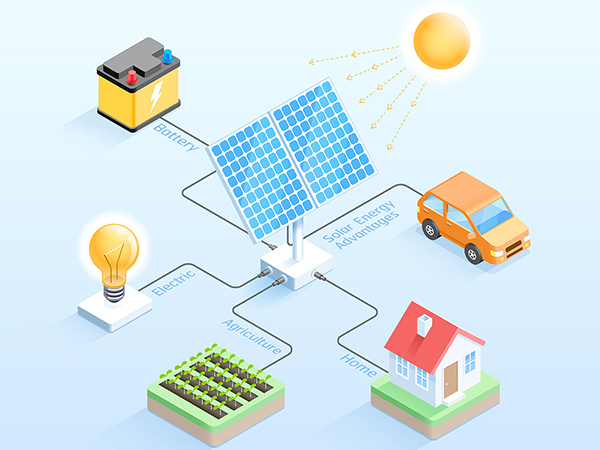 From the perspective of solar energy resources: solar energy is the most abundant and widespread renewable energy on earth. Not only is the total amount huge, “inexhaustible and inexhaustible”, it is also widely distributed and easy to obtain, without the need for mining and transportation.

From the perspective of photovoltaic power generation systems, many of its advantages are unmatched by other energy sources. This is mainly because solar photovoltaic power generation systems are mainly composed of electronic components and do not involve mechanical parts.
(1) Easy to transport and install. Photovoltaic modules are simple in structure, small in size, and light in weight. Therefore, they are convenient to transport, easy to install, and have a short construction period; and the scale can be large or small, and they can be easily combined with buildings. Also, because the transportation and installation are relatively easy, As long as the solar energy resources are better, photovoltaic power generation can be constructed and used, such as desert areas.
(2) Simple operation and maintenance. The photovoltaic cell has no moving parts, easy to start, and can be used at any time: during the photoelectric conversion process, the photovoltaic material does not undergo any chemical changes, so there is no mechanical wear and consumption, low failure rate, operation and maintenance Both are relatively simple and can be unattended.
(3) Safe, reliable and long life. Photovoltaic cells have no moving parts and do not undergo any chemical changes. Due to the city’s safe operation, high reliability, no material loss, and long service life.
(4) Clean and less environmental pollution. Photovoltaic cells have no moving parts and do not undergo any chemical changes, so they do not produce noise, are odorless, and have little direct pollution to the environment. In all renewable and non-renewable energy power generation systems, photovoltaic cells have a negative impact on the environment. Probably the smallest.
However, it needs to be particularly pointed out that the crystalline i-chip M manufacturing process in the early stage of the production of crystalline silicon photovoltaic cells is a high energy consumption and high pollution process. In some thin-film solar cell modules, there are trace amounts of toxic substances (such as the cadmium metal used to make cadmium telluride is toxic), so there is a possibility that these toxic chemicals will be released in the event of a fire.

If you do not consider the manufacturing process and cost, and only consider the convenience of energy use, photovoltaic power generation is undoubtedly the most ideal new energy utilization technology.
Solar photovoltaic power generation has not been quickly promoted and applied in a large area, which shows that it also has some shortcomings. These deficiencies are mainly caused by the weakness of solar energy resources.
(1) Energy dispersion (low energy density). The energy density of solar energy is very low. In actual use, to obtain larger power, it is often necessary to set up a considerable area of ​​solar energy harvesting equipment, which requires a large area and a large amount of materials. The structure is complex and the cost increases.
(2) Energy is unstable. The radiation angle of sunlight changes continuously over time, coupled with the influence of climate, season and other factors, the solar reconnected radiant energy reaching a certain place on the ground is unstable, with obvious volatility and even randomness. This creates a lot of difficulties for economic and reliable large-scale utilization.
(3) Energy is discontinuous. With the alternation of day and night, the direct solar radiant energy reaching the ground is discontinuous. There is no direct solar radiation at night, and acid radiation is also very weak. Most solar equipment cannot work at night. In order to overcome the above difficulties, it is necessary to research and equip energy storage equipment to store the solar energy collected in sunny days (and the remaining part after normal use) for use at night or on cloudy and rainy days.