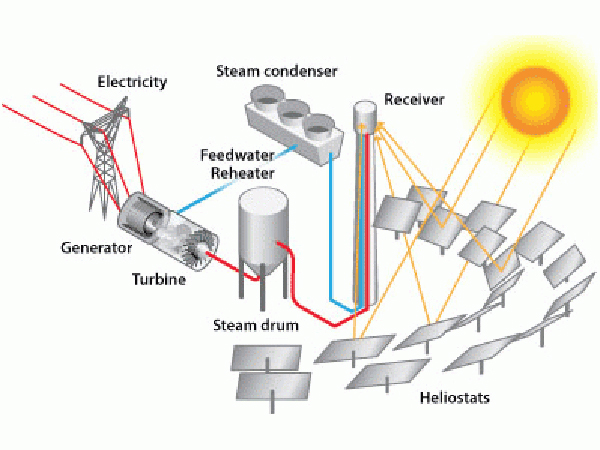 The energy flow density of solar radiation is low. For larger-scale thermal power systems, a single focused collector can no longer meet the requirements. It is often necessary to design a large-area concentrating system to form a huge solar collection field to achieve this. Spotlight function.

There are also some solar power systems that do not use a focusing structure, and most of them use vacuum tube collectors, as shown in Figure 1.

Figure 2 shows the trough type concentrating and collecting system of solar thermal power system. The entire trough system is composed of a plurality of trough mirrors curved in a parabolic shape. Sometimes, for the convenience of manufacturing, each trough mirror adopts a parabolic cylindrical structure. Each trough mirror concentrates the sunlight it receives on a tubular receiver at the line of the focal point of its section

Because the trough system has the worst wind resistance, most of the current trough-type power stations are in areas with little or no wind.

In the Mojave Desert in southwestern California, USA, nine solar power stations have been built since 1985, with a total installed capacity of 354MW and a total annual power of 10.8 billion kW·h. With the continuous development of technology, the system efficiency has increased from 11.5% to 13.6%; the construction cost has been reduced from US$5,976 per kW to US$3,011 per kW, and the cost of power has been reduced from 263 cents per kWh to 12 cents per kWh.

In August 2007, Israel Soler Solar Systems announced that it would cooperate with Pacific Gas and Electric Corporation to build the world’s largest solar power plant in the Mojave Desert. The power plant consists of 1.2 million tank-type solar panels and about 510km of vacuum tubes. It covers an area of ​​about 24k square meters. When completed, it will have a maximum power capacity of 553MW, which can provide electricity to 400,000 homes in central and northern California.

In addition, the solar-gas combined cycle trough thermal power system (ISCC for short, also known as the integrated solar combined cycle system) is a combination of trough solar thermal power system and gas turbine power system to optimize energy utilization structure and improve energy utilization efficiency . As an emerging form of trough solar thermal power system, ISCC has attracted more and more attention from the international community. With the ISCC integrated solar energy device, although the intensity of sunlight is different every hour of the day, the efficiency of solar power is improved. Compared with the power rate of conventional gas generators of 50% to 55%, the power rate of this combination device can reach 70% during peak hours. Currently, the Kuraymat project in Egypt and the AinBeni Mather project in Morocco have entered the implementation stage, and the Kuraymat project in Egypt has been put into operation.

The principle of linear Fresnel reflective concentrating technology originated from parabolic trough reflective concentrating technology. The Fresnel system uses a set of flat mirrors to replace the parabolic curved mirrors in the trough system, which is a simplified trough system. By adjusting the tilt angle of the control plane mirror, the sunlight is reflected into the light heat pipe to achieve focus heating.

The linear Fresnel reflective concentrator is mainly composed of three parts: the main reflector field receiver and the tracking device. Sometimes a small parabolic reflector (secondary condenser) is installed on the top of the condenser to enhance the focus of sunlight. As shown in Figure 4. The main mirror field is a flat mirror array composed of flat mirror strips. The long axis of the flat mirror (that is, the rotation axis) is in the same horizontal plane: the tracking device makes the flat mirror rotate around the rotation axis to track the movement of the sun, and the reflected light of the flat mirror converges to the receiver. Light receiving port: The receiver receives the reflected light from the main reflector and makes it converge on the absorbing steel pipe to convert light energy into heat energy.

When the scale of the power station reaches the megawatt level, it needs to be equipped with multiple sets of light-concentrating and heat-collecting units. In order to prevent the edge mirrors of the main mirror field of adjacent units from blocking each other, the supporting structure of the collector needs to be raised, the distance between adjacent units also needs to be increased, and the land utilization rate is low. Therefore, the researchers proposed a compact The concept of a linear Fresnel reflective condensing system uses multiple receivers to receive the reflected light from the mirror, as shown in Figure 5.

③Tower solar thermal power system
The tower-type solar thermal power system generally builds a high tower on an open and flat ground, and installs a receiver on the top of the high tower: centered on the high tower, a large number of solar reflector groups are arranged on the surrounding ground (which can automatically track the sun setting of the sun) Mirror group) The heliostat group accumulates sunlight on the receiver, heats the working medium (such as water), and generates high-temperature and high-pressure steam to drive the steam turbine to generate electricity.

④Dish-type solar thermal power system
The dish-type solar thermal power system, also known as the parabolic mirror/Stirling system, consists of many mirrors forming a large parabola, similar to a large parabolic radar antenna (Figure 6 and Figure 7), with a concentration ratio of hundreds of times to Thousands of times: a thermal energy receiver is placed on the focal point of the parabolic surface, and a reflector is used to concentrate the incident sunlight on a small area where the thermal energy receiver is located. The collected thermal energy heats the heat transfer working medium in the receiver to At very high temperatures (such as around 750°C), the generator is driven to generate electricity.

The American Thermal Power Plan cooperated with Cummins. In 191, the developer used a 7kW dish/Stirling power system. At the same time, it also developed a 25kW disc power system with a lower cost. It was tested in the power sector in 1996 and started operation in 1997.

Limited by the size of the light-concentrating and heat-collecting device, the power of the dish-type solar thermal power system is smaller, and it is more suitable for distributed energy systems.

The dish/Stirling system has high optical efficiency, low starting loss, and an efficiency of up to 29, ranking first among the three types of systems. The future research direction is mainly to improve the stability of the system and reduce the cost of system power.